President Donald Trump held a second campaign rally in as many nights Friday, this time taking the stage in Louisiana in the hope of rallying Republican voters against the state's Democratic Gov. John Bel Edwards.
"Tomorrow you will head to the polls and vote to replace a liberal democrat who has sold you out, John Bell Edwards, with a great Republican governor," Trump said in his opening remarks.
The president is expected to be joined onstage in Lake Charles by both U.S. Rep. Ralph Abraham and businessman Eddie Rispone, but not endorse either candidate in order to maximize chances that Edwards will fall below the 50 percent vote threshold needed to avoid a runoff in Saturday's gubernatorial "jungle primary," in which all the candidates appear on a single ballot.
The president's trip to Louisiana comes one day after another fiery rally in Minneapolis, Minn., during which Trump slammed House Democrats who have launched an impeachment inquiry against him.

Just landed in Louisiana! Vote against John Bel Edwards, he has the worst jobs record in the United States. Louisiana will do much better by electing a REPUBLICAN. See everyone soon! @LAGOP https://twitter.com/lagop/status/1182788342783598602 … 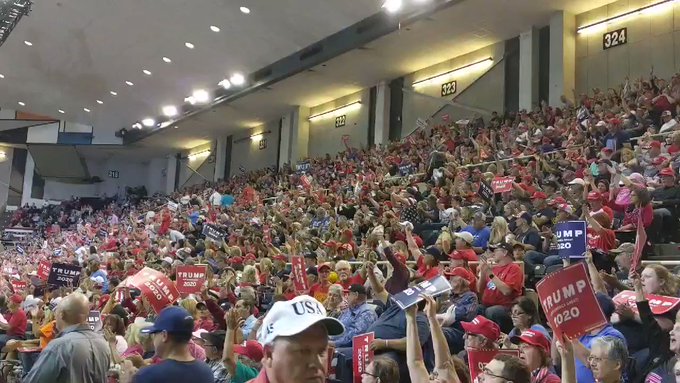 8,941 people are talking about this
Trump slammed the "rage-filled Democrat party that has gone completely insane" accusing them of waging a "nonstop battle" to "overthrow" his presidency.
Other top Republicans, including Vice President Pence and Donald Trump Jr. have paid visits to the state, which Trump won by nearly 20 percentage points in 2016.
Neither Abraham nor Rispone has been able to break away as the top competitor, even as Rispone poured $11 million of his own personal wealth into the campaign. Party leaders' efforts to keep the men from fighting each other have failed, raising concerns the backbiting could wound both GOP contenders and help Edwards. Republicans blame attacks among their own candidates for helping to elect Edwards four years ago.
Edwards isn't the type of liberal, anti-Trump Democrat with whom the president usually clashes.

Video
Louisiana's governor is an anti-abortion, pro-gun West Point graduate who avoids criticizing Trump, talks about his strong rapport with the White House and calls the impeachment inquiry a distraction for Washington.
While Edwards' efforts to keep the president at bay in the governor's race have been unsuccessful, the Democratic incumbent isn't complaining about the rallies. Instead, he has downplayed them, calling it unsurprising that Trump backs members of his own party in the "hyperpartisan" environment of Washington. He said he would continue to "work well" with the president and focus on his own, bipartisan approach to governing.

Video
CLICK HERE FOR THE FOX NEWS APP
"When my opponents realized just how much support my campaign had from the people of Louisiana, they started calling in help from forces in Washington, D.C.," Edwards said. "My opponents are obsessed with political partisanship because the only way they think they can win is to divide the state of Louisiana."
Republicans nationally have targeted Edwards for ouster since his longshot election victory four years ago. But work to unify around one major contender failed, with the state's top-tier, well-known GOP officials passing on the race.
The Associated Press contributed to this report.