Home » Advertisement » Featured » Biden on whether Senate GOP will give his cabinet nominees a tough time: ‘Are you kidding me?’

Biden on whether Senate GOP will give his cabinet nominees a tough time: ‘Are you kidding me?’ 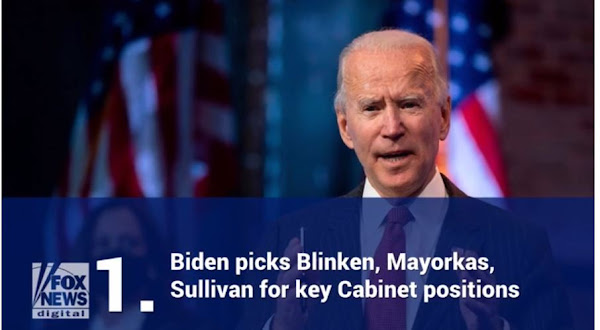 Fox News Flash top headlines for November 23 Fox News Flash top headlines are here. Check out what's clicking on Foxnews.com. As he makes his first round of Cabinet announcements, President-elect Joe Biden is acknowledging the potentially rough road ahead he’ll have in confirming his nominees through a Senate that may still be controlled by the Republicans. Asked Monday by pool reporters if he expects Republicans to put up any significant roadblocks to his Cabinet nominees – who need Senate approval to be confirmed – Biden laughingly responded, “Are you kidding me." BIDEN UNVEILS PICKS FOR KEY CABINET POSITIONS The current balance of power for the next Senate coming out of this month’s elections is 50 Republicans and 48 Democrats. That means Democrats must win both of Georgia’s twin runoff elections on Jan. 5 to make it a 50-50 Senate. If that occurs, Vice President-elect Kamala Harris would be the tie-breaking vote, giving her party a razor-thin majority in the chamber. Otherwise, GOP Sen. Mitch McConnell of Kentucky will remain as Senate majority leader. The president-elect earlier Monday announced a number of key Cabinet appointments, including Antony Blinken as secretary of state, Alejandro Mayorkas as secretary of homeland security, Avril Haines to serve as the first woman to lead the intelligence community, and former Secretary of State John Kerry as presidential climate envoy. Blinken and Mayorkas were confirmed to deputy secretary level cabinet positions during President Obama’s administration with little GOP support. Biden was also asked why he choose to announce national security nominees first. His brief answer – “because it’s national security.” placeholder President-elect Joe Biden and Vice President-elect Kamala Harris attend a meeting at The Queen theater Monday, Nov. 23, 2020, in Wilmington, Del. (AP Photo/Carolyn Kaster) President-elect Joe Biden and Vice President-elect Kamala Harris attend a meeting at The Queen theater Monday, Nov. 23, 2020, in Wilmington, Del. (AP Photo/Carolyn Kaster) The president-elect spoke as he was arriving at his makeshift transition headquarters in his hometown of Wilmington, Del., to team up with Harris for a virtual meeting the United States Conference of Mayors. KERRY VOWS TO TREAT CLIMATE CHANGE AS 'URGENT NATIONAL SECURITY THREAT' Harris spoke first, telling the mayors, “You all are where the rubber meets the road. You’re on the ground. You walk the streets of America where people recognize you. …You are the ones who take the heat on a daily basis.” Biden thanked the mayors, telling them, “All of you are on the frontlines from the beginning. As we head into this dark winter ... we want you to know we’re here for you.”