Israel's occupation of Gaza cost $16.7B over 11 years, UN reports


Israeli occupation of the Gaza Strip has cost the seaside territory as much as $16.7 billion in economic losses and sent poverty and unemployment skyrocketing, a U.N. report said Wednesday, while calling on Israel to lift the long-standing blockade. The U.N. Conference on Trade and Development (UNCTAD) released the report titled "Economic costs of the Israeli occupation for the Palestinian people: The Gaza Strip under closure and restrictions," which focused on the costs only from the prolonged closure and military operations in Gaza during the period. “The result has been the near-collapse of Gaza’s regional economy and its isolation from the Palestinian economy and the rest of the world,” the U.N. agency said in a statement, as quoted by The Associated Press (AP). The report analyzed both the effects of the blockade, which has greatly limited Gaza’s ability to export goods, as well as the effects of the three wars, which took place in 2008-2009, 2012 and 2014. The last war was especially devastating, killing over 2,200 Palestinians, more than half of them civilians, and displacing some 100,000 people from homes that were damaged or destroyed, according to U.N. figures. Using two methodologies, the report said that overall economic losses due to the blockade and wars ranged from $7.8 billion to $16.7 billion. It said Gaza’s economy grew by a total of just 4.8% during the entire period, even as its population grew over 40%. These economic losses helped propel unemployment in Gaza from 35% in 2006 to 52% in 2018, one of the highest rates in the world, the UNCTAD said. It said the poverty rate jumped from 39% in 2007 to 55% in 2017. Based on Gaza’s economic trends before the closure, the report said the poverty rate could have been just 15% in 2017 if the wars and blockade had not occurred. “The impact is the impoverishment of the people of Gaza, who are already under blockade,” said Mahmoud Elkhafif, the agency’s coordinator of assistance to the Palestinian people and author of the report. In Gaza, Hamas spokesperson Hazem Qassem said the report revealed “the level of the crime” committed by Israel. “This siege has amounted to a real war crime and pushed all service sectors in the Gaza Strip to collapse,” he said. “These figures also reveal the international inability to deal with the illegal siege on Gaza.” Gisha, an Israeli human rights group that pushes for freedom of movement in and out of Gaza, said it was Israel’s “moral and legal obligation” to lift the blockade. “The true price paid by Palestinians in lost time, opportunities and separation from loved ones is inestimable,” it said. Gaza, measuring 375 square kilometers (145 square miles), is home to around 2 million Palestinians, more than half of them refugees. Some 90% of its land and sea boundaries and its access to the outside world are controlled by Israel, while Egypt controls its narrow southern border. Since 2007, the besieged enclave has been under a crippling Israeli and Egyptian blockade that has gutted its economy and deprived its inhabitants of many vital commodities, including food, fuel and medicine. In the long-embargoed enclave, the humanitarian situation has grown worse by the day. The U.N. Relief and Works Agency (UNRWA) stated last year that there are now some 620,000 Gazans who live in abject poverty, meaning those who cannot cover their basic food needs and who have to survive on $1.60 per day and nearly 390,000 in absolute poverty. Fraying under the weight of the blockade, Gaza's fragile health system faces collapse from the coronavirus crisis within days as hospitals continue to be overwhelmed by the rising number of COVID-19 patients. Israel's long-standing blockade has created serious obstacles for Gazans to have access to a variety of medical supplies. Gaza's health system of 13 public hospitals and 14 clinics, run by nongovernmental organizations (NGOs), has buckled under persistent blockade-linked shortages of medicine and surgical supplies. 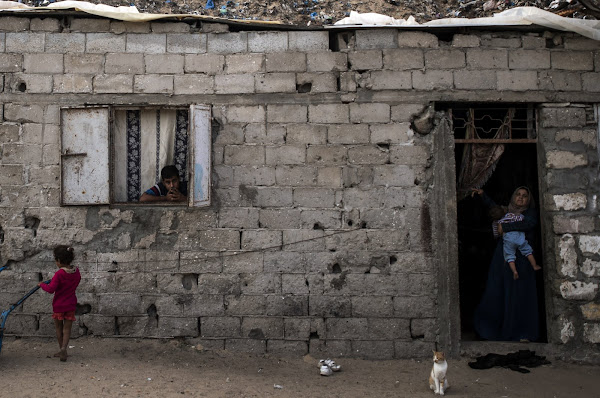