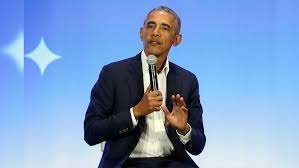 Obama appeared on 'The Breakfast Club' radio show to promote his new book Fox News Flash top headlines for November 26 Fox News Flash top headlines are here. Check out what's clicking on Foxnews.com. Former President Barack Obama said he believes President Trump garnered more than 73 million votes this election cycle, not because of policy but because some Republicans promote a narrative of “White men are victims.” Appearing on the syndicated radio show "The Breakfast Club," Obama said Wednesday, “What’s always interesting to me is the degree to which you’ve seen created in Republican politics the sense that White males are victims.” The country's 44th president continued noting, “They are the ones who are under attack – which obviously doesn’t jive with both history and data and economics. But that’s a sincere belief that’s been internalized, that’s a story that’s being told and how you unwind that is going to be not something that is done right away, it’s going to take some time.” Obama said during the interview that the Trump administration “has failed miserably in handling just basic looking after the American people and keeping them safe” during the coronavirus pandemic. Still, Trump put up a competitive fight against President-elect Joe Biden, Obama said, because millions felt “under attack” by Democrats. “It turns out politics is not just about policy, it’s not just about numbers, it’s about the stories that are being told,” the former president said. BIDEN TAKES SHOT AT EVANGELICAL HISPANICS WHO VOTED FOR TRUMP Later in the show, co-host DJ Envy asked Obama to answer those who said he hadn’t done enough for people of color while in office. Obama blamed congressional hurdles. “I understand it because when I was elected there was so much excitement and hope, and I also think we generally view the presidency as almost like a monarchy in the sense of once the president’s there, he can just do whatever needs to get done and if he’s not doing it, it must be because he didn’t want to do it,” Obama responded. placeholder Envy argued that Trump had behaved that way. “Because he breaks laws or disregards the Constitution,” Obama replied. OBAMA ADMITS READING MARX 'AS A STRATEGY FOR PICKING UP GIRLS' In the same interview, Obama took a shot at evangelical Hispanics who voted for Trump. "People were surprised about a lot of Hispanic folks who voted for Trump, but there’s a lot of evangelical Hispanics who, the fact that Trump says racist things about Mexicans, or puts undocumented workers in cages, they think that’s less important than the fact that he supports their views on gay marriage or abortion," Obama said. Trump has said he is pro-life but has never expressed opposition to gay marriage. Trump surprised political onlookers with his improved showing with Hispanic voters in 2020 from 2016, helping him to comfortable victories in states with significant Hispanic populations like Texas and Florida. Some critics attacked Obama for what they viewed as divisive comments, reminiscent of his 2008 reference to "bitter" working-class voters who "cling" to guns and religion. Others noted the "cages" he referred to from the Trump administration's family separation policy were built during his presidency. Meanwhile, Biden has sought to establish himself apart from the Obama administration, telling NBC News his White House won’t be an “Obama third term.” CLICK HERE TO GET THE FOX NEWS APP "This is not a third Obama term because we face a totally different world than we faced in the Obama-Biden administration,” Biden said. “President Trump has changed the landscape, it’s become ‘America First,’ which meant America alone.”