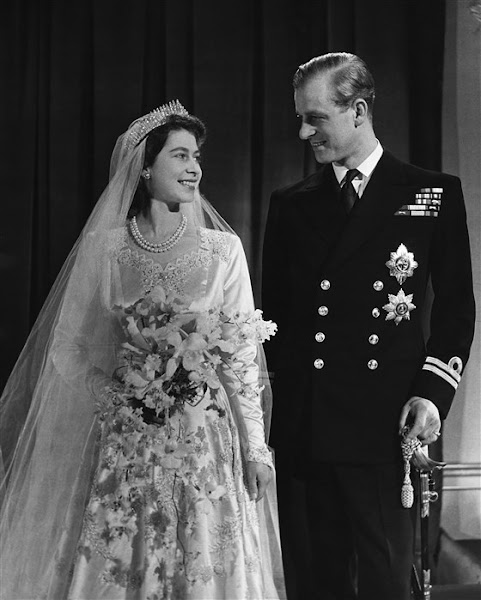 The new season of “The Crown” has given viewers a chance to travel back in time and revisit one of the most memorable royal pairings — Prince Charles and Princess Diana. But the return of the drama coincides closely with the anniversary of a far more enduring marriage within the House of Windsor.

Now, in honor of their 73-year union, the 94-year-old monarch and her 99-year-old husband have given royal watchers a treat by posing for a new portrait.

The photo, taken in the Oak Room at Windsor Castle earlier this week, captures a sweetly sentimental moment for the couple, as they’re seen looking at an anniversary card made for them by great-grandchildren Prince George, Princess Charlotte and Prince Louis. The scene shows them surrounded by other cards and well-wishes to mark the big occasion.

And it truly is that. With 73 years as husband and wife, the pair have surpassed any other marriage in the history of the British monarchy — by quite a margin. The closest any other couple has come to their lengthy partnership was King George III and his queen consort, Charlotte of Mecklenburg-Strelitz, who were married for 57 years in the 18th century.

In fact, during the celebration of Elizabeth and Philip's platinum anniversary in 2017, Her Majesty and His Royal Highness posed directly between paintings of George and Charlotte in the White Drawing Room at Windsor Castle.

The queen was just a teenager (and not yet a queen) when she fell in love with the man then known as Philip Mountbatten, and married him at the age of 21. But they were related long before they married. The two are third cousins, from their shared connection to Queen Victoria, as well as second cousins once removed, from their kinship to King Christian IX of Denmark.

The couple have four children together, including Charles, Prince of Wales; Anne, Princess Royal; Prince Andrew, Duke of York; and Prince Edward, Earl of Wessex. They also have eight grandchildren and eight great-grandchildren.