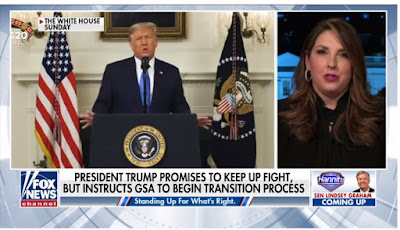 Trump tells GSA to begin transition, promises to keep up legal fight Republican National Committee Chair Ronna McDaniel joins 'Hannity' to share her reaction President Trump took to Twitter late Monday to respond to those who see the General Services Administration’s decision to make federal resources available to Joe Biden’s transition team as a sign that his legal challenge is losing steam. placeholder The GSA ascertained that Biden, the president-elect, is the “apparent winner” of the election earlier this month. Trump indicated in an earlier tweet that he directed his team to cooperate on the transition, but vowed to keep up the fight and followed up with another late-night tweet. “What does GSA being allowed to preliminary work with Dems have to do with continuing to pursue our various cases on what will go down as the most corrupt election in American political history?” Trump tweeted. “We are moving full speed ahead. Will never concede to fake ballots & “Dominion.”’ Trump’s tweet came shortly after officials in Michigan voted to certify the election, and Pennsylvania seemed to be inching closer to certifying a Biden victory. Dominion Voting Systems has faced scrutiny and unproven claims about its ability to rig an election. Michael Steel, a spokesman for the company, told Fox News that it is "physically impossible" to switch votes. John James, the Republican who lost in his race for the Senate in the state, has also refused to concede after losing by nearly 95,000 votes. MLive.com reported that James questioned the integrity of the election and said it would be “selfish” to concede because the public deserves to know that the votes were counted properly. “In order to maintain that trust, the state owes both ballot access and ballot integrity. If both are not provided in balanced proportion, then the one side will always feel that they have not only lost but they have been cheated. This is a danger to Democracy,” he wrote. On Monday, the Pennsylvania Supreme Court turned back the Trump campaign lawsuits that aimed to dismiss more than 8,000 absentee ballots in Allegheny County for missing key information. Josh Shapiro, the state’s attorney general, made headlines shortly before the election, when he tweeted, “If all the votes are added up in PA, Trump is going to lose." He took to Twitter again on Monday to announce, “The Trump campaign was attempting to throw out ballots from eligible voters. Guess what? They just lost in the PA Supreme Court. Again.” placeholder Trump legal challenges flounder as GSA grants Biden transition fundsVideo Trump’s legal team has suffered a string of losses in lower courts and what some saw as a brief public relations hiccup on Sunday when it distanced itself from Sidney Powell, the high-powered lawyer who represented Gen. Michael Flynn in his case. Powell told the Wall Street Journal that her intention is to represent “#Wethepeople.” “I intend to expose all the fraud and let the chips fall where they may. We will not allow the foundations of this great Republic to be destroyed by abject fraud," she said. Despite these legal setbacks and the decision by states to verify election results, supporters of the president seemed to have their eyes set on the U.S. Supreme Court since Nov. 6, when Justice Samuel Alito ordered officials in the Keystone State to keep mail-in ballots that arrived after Election Day in a separate location. Harvard Law Professor Emeritus Alan Dershowitz told Fox News’ “Sunday Morning Futures” on Sunday that there are several avenues that Trump could take, but that even those options currently appear limited in their ability to secure an election victory. “They have two or three legal, constitutional paths,” Dershowitz said. Dershowitz: 'Legal theory' supports election lawsuits but evidence is crucialVideo The first one he addressed was in a case out of Pennsylvania, where Republicans are fighting against a state court decision that extended the deadline for accepting mail-in ballots beyond what had been specified by state law. Dershowitz said that the argument that the court usurped the legislature’s power could be a winning one with the Supreme Court. placeholder Another argument that could work in Trump’s favor, Dershowitz said, is based on the allegation that in Pennsylvania, Democratic voters were allowed to fix problems with their ballots, but Republicans were not permitted to do so. He said this could be a viable and potentially successful Equal Protection argument. Rudy Giuliani, one of Trump's lawyers, told Fox Business on Monday night that these legal setbacks will eventually turn around. He said the court in Pennsylvania didn't listen to a "single fact." CLICK HERE TO GET THE FOX NEWS APP "And I don't know how a judge could've concluded that the facts aren't substantial when they haven't even been presented yet," Giuliani said. "Unfortunately, we haven't yet gotten a fair decision. We will. We've got to be a little patient." Emily Murphy, the GSA administrator, made the determination after Trump's efforts to subvert the vote failed across battleground states, citing, “recent developments involving legal challenges and certifications of election results.” The Department of Defense said in a statement late Monday that it has been in contact with Biden's transition team and "we will begin immediately implementing our plan to provide support in accordance with the statute, DoD policy and the memorandum of agreement between the White House" and the Biden team. Fox News' Ronn Blitzer, Thomas Barrabi, and the Associated Press contributed to this report