Israel preparing for potential US military strike on Iran: Report 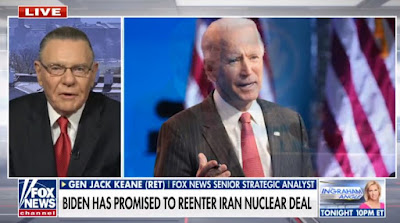 Prime Minister Benjamin Netanyahu met with the Suadi Arabian crown prince in a secret meeting, according to Israeli media close Incoming Biden administration signals shift in Iran foreign policy Israel Defense Forces have been preparing for the possibility that the U.S. military will strike Iran during the next two months of President Trump's lame-duck period, Axios reports. placeholder This comes a week after the New York Times reported that Trump asked senior advisers about his options to strike Iran's main nuclear site after international inspectors reported details about a significant increase in the Iran's stockpile of nuclear material. There is no intelligence that indicates an imminent U.S. strike, but Israeli officials anticipate that the coming weeks will be “a very sensitive period," according to Axios. BIDEN SECRETARY OF STATE PICK BLINKEN OPPOSED TERRORIST LABEL FOR IRAN'S REVOLUTIONARY GUARD Israeli media reported earlier this week that Prime Minister Benjamin Netanyahu flew into Saudi Arabia for a secret meeting with Crown Prince Mohammed bin Salman on Sunday night. The two longtime foes share a common enemy in Iran, and the reported meeting coincided with Secretary of State Mike Pompeo's visit to the Persian Gulf. The Trump administration ramped up its "maximum pressure campaign" against Iran during the president's lame-duck period. Last week, the U.S. slapped sanctions on Iran’s Mostazafan Foundation, which the Treasury Department describes as an "immense conglomerate" whose "holdings are expropriated from the Iranian people and are used by the Supreme Leader Ali Khamenei to enrich his office, reward his political allies, and persecute the regime’s enemies." BIDEN WILL MOVE US CLOSER TO 2015 NUCLEAR DEAL WITH IRAN, EXPERTS SAY In announcing the new sanctions, Pompeo warned the future Biden administration about undoing Trump's sanctions on Iran. "The Western media reports with alarm that the Iranian regime is increasing its stockpile of enriched uranium," Pompeo wrote in a document entitled, "The Importance of Sanctions on Iran." "This is indeed troubling, but even more disturbing is the notion that the United States should fall victim to this nuclear extortion and abandon our sanctions." President-elect Biden wants the United States to re-enter the 2015 Iran nuclear deal. CLICK HERE TO GET THE FOX NEWS APP "I will offer Tehran a credible path back to diplomacy. If Iran returns to strict compliance with the nuclear deal, the United States would rejoin the agreement as a starting point for follow-on negotiations," Biden wrote in an op-ed for CNN in September. The Iranian regime would welcome the de-escalation of tensions, as sanctions have crushed its economy. Iran's President Hassan Rouhani said on state TV Wednesday he hopes Iran and the U.S. could find their way back to “the situation on Jan 20, 2017,” before President Trump was inaugurated. The Associated Press contributed to this report.