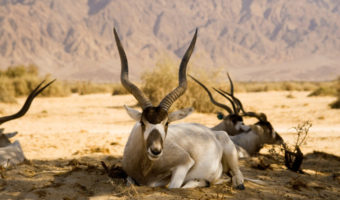 The Addax, sometimes called the ‘screw horn antelope’, because of its twisted horns, is a large, desert dwelling member of the antelope family, closely related to the Oryx. The Addax is a critically endangered mammal which is found in several isolated areas in the sahara desert in Northern Africa. The Sahara is the worlds largest hot desert. The addax is extremely rare within its native habitat and with only 500 Addax left in the wild, this antelope could unfortunately, face extinction. ADDAX DESCRIPTION The head and body length of the addax measures 150 – 170 centimetres (59.1 – 66.9 inches). Males are slightly taller than females and measure 105 – 114 centimetres (3.5 – 3.8 feet) at the shoulder whereas females measure 93 – 108 centimetres (3.1 – 3.6 feet) at the shoulder. Males weigh between 99 – 124 kilograms and females weigh 60 – 125 kilograms. The coat of the addax varies in colour depending on season. In winter their coat is a greyish brown colour with white hind quarters and legs. During summer, their coat turns lighter, almost completely white or a sandy beige which helps to maintain body temperate as lighter colours reflect the heat more. They have black/brown tufts of hair on their tails. Both male and female addax have horns and a patch of brown hair on their foreheads which forms an ‘X’ shape over their nose. Their horns have 2 – 3 twists and can reach a length of 120 centimetres in males and 80 centimetres in females. Between the horns are long, black hairs that end in a short mane on their necks. Addax have short, thick legs and wide, flat hooves with flat soles which help prevent them from sinking into the sand. The addax walks by throwing its wide-hoofed feet sideways to avoid brushing against the opposite limb, but places one foot behind the other, leaving a single line of tracks. The animal runs in a flat gallop and appears stiff-kneed, due to minimal leg flexing while running. It is considered one of the slowest runners of the antelopes, perhaps reflecting its adaptation to sandy terrain. The addax differ from other species of antelope as they have large, square shaped teeth (like cows) and they lack the typical facial glands. ADDAX HABITAT The addax prefers sandy desert terrain and stony deserts, semi-desert and dry steppes. Addax rest during the day in deep depressions dug out in the sand often located near large boulders to shield them against the wind and hot sun. ADDAX DIET The addax are herbivores and their diet consists of desert succulents, leaves, Aristida grasses, herbs, perennials and small bushes (if available). They also feed up on Parnicum grass whereby they will only eat the inner shoots and seeds and disregard the dry, outer leaves. These seeds provide adequate protein in the addax diet. Addax can survive without water as their thirst is satisfied by the moisture they obtain from the plants in their diet. ADDAX BEHAVIOUR Addax are nocturnal animals and are adapted to extreme desert conditions. Some addax are able to live far from each other in their habitat, but this does not cause any problems because they have over developed sensory skills that enable them to detect and locate each other over vast distances. Addax can also track rainfall and will head for rainy areas where vegetation is more abundant. Some addax live in herds which contain 5 – 20 individuals of both male and female addax. The herds generally stay in one place, but may wander in search of food. Herds are usually led by the eldest dominant male. ADDAX REPRODUCTION Male addax reach sexual maturity at 3 years old whereby females mature much earlier at one and a half years. After a gestation period of 257 – 264 days (8 – 9 months), females give birth to one young which weighs 4.7 – 6.75 kilograms. The young addax is hidden away for around 6 weeks and suckled 2 – 3 times a day by its mother. Young addax have a tan coloured coat with very faint or no markings. The life span of the addax is around 19 years. ADDAX CONSERVATION STATUS The Addax is classed as ‘Critically Endangered’ by the IUCN. Addax are nearly extinct in the wild, having been eliminated from much of their original range. Farmers have destroyed many so that cattle do not have to compete for grazing land. There are only a few hundred left in the wild. Excessive hunting for its horns, flesh and hide seems to be the main cause of decline for the addax. The good news is that there are over 1,000 addax held in captivity in the US, Europe and the Middle East. There are reportedly 600 addax managed in captive breeding programs, therefore, with continued conservation efforts, the future for this amazing animal may be a success.