After California’s then-Attorney General Kamala D. Harris announced felony pimping charges last year against the two owners of Backpage.com — a classified-ad website that is a hub for sex trafficking and prostitution, one of the men cut a $10,000 check to House Minority Leader Nancy Pelosi’s super PAC. 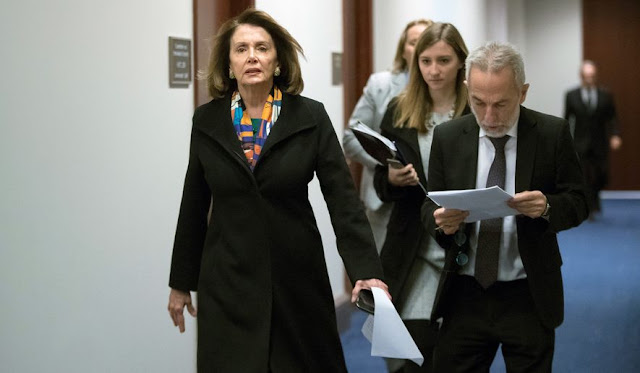 Mrs. Pelosi’s political action committee, House Majority PAC, has resisted giving the money back, and an aide to Mrs. Pelosi said the California Democrat knows nothing about the contribution.

The uproar over sexual harassment that began with the Harvey Weinstein scandal has intensified the scrutiny of political contributions linked to Backpage, which law enforcement officials say is the chief platform for activities far worse than harassment, including sexual slavery and child prostitution.

Mrs. Pelosi isn’t the only Democrat struggling to deal with the piles of cash that Backpage’s owners spread around to candidates and state Democratic parties over the years.

Even Ms. Harris, a California Democrat who is now a U.S. senator, ducked the issue. Her office wouldn’t respond to repeated emails about Backpage money going to House Majority PAC and other Democratic organizations.

Since 2010, the owners and their wives have shoveled about $99,000 to candidates and about $95,000 to Democratic parties in Arizona, Colorado and New Mexico, according to federal campaign finance data collected by the Center for Responsive Politics.


Bowing to mounting pressure, including a bipartisan Senate investigation that found the owners knowingly sold ads to pimps who coerced minors into prostitution, Backpage in January closed down its adult services sections.

The websites, however, continue to be marketplaces for the sex trade.

Detroit police last week arrested two men who were using Backpage to run a sex trafficking ring after an underage girl told police she was brought to the city and put to work as a prostitute, with “dates” arranged on the website.

In June, a Chicago man was arrested after using Backpage to sell a 16-year-old girl who was eventually killed by a client.

Such stories of prostitution and sex trafficking linked to Backpage are relatively commonplace across the country.

The founders and controlling shareholders of Backpage, Michael Lacey and James Larkin, and Backpage executives and shareholders John Brunst and Scott Spear, have made fortunes from the websites.

In California alone, Backpage rakes in about $2.5 million per month, according to charging documents in the Golden State.

Mr. Larkin made the contribution to the House Majority PAC in October 2016, a week after he and Mr. Lacey were charged in California. A judge, citing federal law that shields internet sites from most liability, dropped the pimping charge in August. Related money laundering charges are proceeding against the men.

Legislation spearheaded by Sen. Rob Portman, Ohio Republican, would tighten federal law to hold accountable websites such as Backpage that host thinly disguised ads for commercial sex and child prostitution. The bill is expected to easily pass the Senate early next year.

There is still the question of what to do about the Backpage money.

“The contribution from James Larkin was received and spent during the 2016 election cycle. The allegations against Larkin are reprehensible, and HMP will not accept any future contributions from Larkin or his associates at Backpage.com,” he said in a statement to The Washington Times.

An aide to Mrs. Pelosi said she “had no role in this contribution, [and] she did not solicit this donation.”

The lion’s share of the contributions to state parties since 2010 went to the Colorado Democratic Party, despite the Backpage owners all residing in Arizona. They handed over a total of $70,000 to the Colorado party. All the donations were made in 2014.

Mr. Larkin last year made a single $10,000 contribution to the Arizona Democratic Party, according to federal campaign records.

An official at the Colorado Democratic Party said they were looking into the matter, but the party has been dodging questions about the tainted contributions since at least April.

The Arizona and New Mexico parties did not respond to questions about their plans for the Backpage money.

The Arizona Democratic Party has been under increasing pressure from its Republican counterpart to return the money or donate it to an appropriate charity.

“They obviously have the cash to return this dirty money; they just don’t want to return it,” she said. “Arizona Democrats, including [Congress members] Kyrsten Sinema, Tom O’Halleran and Ann Kirkpatrick, need to step up to the plate and tell them to donate the money.”

The Congress members also struggled to address the Backpage money in their campaign coffers.

Ms. Kirkpatrick, who federal records show pocketed at least $16,000 since 2010, finally rid herself of it in September with a donation to the Arizona Coalition to End Sexual and Domestic Violence.

Ms. Sinema received the most Backpage money by far. Federal campaign records show that she took in $34,400 from the Backpage owners and their wives since 2010.

Getting rid of it wasn’t easy.

Under pressure to return the money, Ms. Sinema in April attempted to donated $10,000 to Friends of Public Radio Arizona. But the nonprofit balked at the gift of dirty money. Ms. Sinema ultimately sent all the Backpage-linked donations to the Arizona Coalition to End Sexual and Domestic Violence.

The lawmakers, however, have resisted putting public pressure on the Arizona Democratic Party to do the same.

“Why don’t you call my office to get an appointment? I’m on my way to the train station right now. Have a great weekend,” she said.

Her office did not respond to requests for an appointment or comment about the state party keeping the Backpage money.