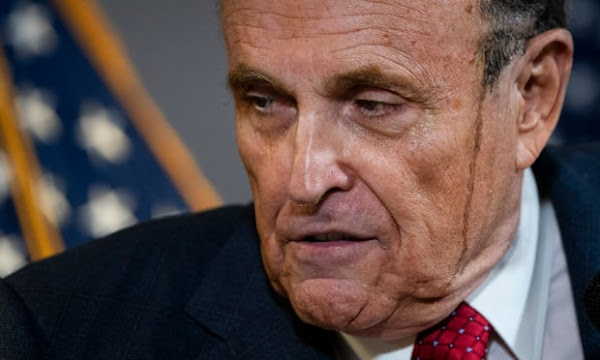 Trump’s personal lawyer was trying to drum up interest in tales of election rigging – but viewers were drawn to the drama on his head Sign up for the Guardian’s First Thing newsletter On 7 November, the day the presidential election was called for Joe Biden, former New York mayor turned Trump attorney Rudy Giuliani addressed the media at a landscaping company between a sex shop and a crematorium on Philadelphia’s industrial fringe. For two weeks, as the Trump campaign continued to claim without evidence that the election had been stolen, America wondered if Giuliani could possibly ever top that. On Thursday, he gave it a damned good try. A day after his claims of massive voter fraud fell flat in a Pennsylvania court room, Giuliani staged another press conference, this time in slightly more salubrious surrounds, at Republican National Committee headquarters in Washington DC. But it did not go well. First, while claiming Republican poll observers had been kept too far away from ballot counters in Philadelphia, a key Trump claim in a vital state which like others fell to Biden, Giuliani attempted to recite a scene from My Cousin Vinny, an Oscar-winning comedy from 1992. Guardian US newsletters for the 2020 election and beyond Read more “Did you all watch My Cousin Vinny? You know the movie? It’s one of my favorite law movies, because he comes from Brooklyn,” he said. Giuliani, who also comes from Brooklyn, tried to sum up a key plot point from Jonathan Lynn’s film, in which Joe Pesci’s personal injury lawyer, hitherto out of his depth in a murder trial, manages to discredit a key witness by proving her vision to be impaired. “And when the nice lady said she saw …” Giuliani said, switching into a very rough approximation of Pesci’s Brooklyn accent. “And then he says to her, ‘How many fingers do I … How many fingers do I got up? And she says three. Oh, she was too far away to see it was only two. “These people [the poll observers] were further away than My Cousin Vinny was from the witness. They couldn’t see a thing,” he added, apparently drawing a line between the movie scene and claims about the problems faced by poll observers in Philadelphia. So far, so predictably surreal. But things got stickier. Rudy Giuliani offered a balanced presentation: both sides of his face sported dark streaks. FacebookTwitterPinterest Rudy Giuliani offered a balanced presentation: both sides of his face sported dark streaks. Photograph: Drew Angerer/Getty Images As Giuliani sweated in front of journalists, streaks of what appeared to be dark hair dye began to run down his face. The internet noticed, of course, and jokes and ridicule spread. Advertisement Worse still for the Trump campaign, the audio feed from the press conference suddenly included unknown persons asking “Can they hear us on the stream?” and discussing “Rudy’s hair dye dripping down his face”. Eventually, the feed was taken down. But Giuliani is nothing if not a trooper for Trump. After mopping back the tarry rivulets, he raised his voice to make his point to the reporters in the room. “I don’t know what you need to wake you up, to do your job and inform the American people, whether you like it or not, of the things they need to know!” he said. “This is real! It’s not made up! There’s nobody here who engages in fantasies.” After the former mayor stood back, continuing to mop his forehead, Trump lawyer Sidney Powell took over the offensive. She claimed to have identified “massive influence of communist money through Venezuela, Cuba and likely China in the interference with our elections here in the United States”. By that point, the unsubstantiated claim barely seemed bizarre. News is under threat … … just when we need it the most. Millions of readers around the world are flocking to the Guardian in search of honest, authoritative, fact-based reporting that can help them understand the biggest challenge we have faced in our lifetime. But at this crucial moment, news organisations are facing a cruel financial double blow: with fewer people able to leave their homes, and fewer news vendors in operation, we’re seeing a reduction in newspaper sales across the UK. Advertising revenue continues to fall steeply meanwhile as businesses feel the pinch. We need you to help fill the gap. We believe every one of us deserves equal access to vital public service journalism. So, unlike many others, we made a different choice: to keep Guardian journalism open for all, regardless of where they live or what they can afford to pay. This would not be possible without financial contributions from those who can afford to pay, who now support our work from 180 countries around the world. Reader financial support has meant we can keep investigating, disentangling and interrogating. It has protected our independence, which has never been so critical. We are so grateful. We need your support so we can keep delivering quality journalism that’s open and independent. And that is here for the long term. Every reader contribution, however big or small, is so valuable. Support The Guardian from as little as $1 – and it only takes a minute. Thank you.