The end of the Pelosi era is in sight 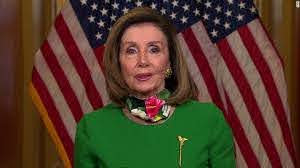 CNN)Nancy Pelosi has been the dominant figure among House Democrats for the better part of the last two decades. So titanic is her power within the Democratic caucus that she has never faced a serious challenge for her leadership role in all that time despite serious election setbacks, a la 2020. It's an absolutely remarkable run of political power and influence at the highest levels of American politics. And now we know when it is likely going to end. At a news conference on Wednesday following her nomination by Democrats to another term as speaker of the House, Pelosi was asked how long she planned to stay in the role -- and said this: "There was a move to put limits on the leadership and the chairs of committees. They said they were going to do it, they didn't do it. But what I said then was whether it passes or not, I will abide by those limits. I can't wait to be working with Joe Biden. ... I don't want to undermine any leverage I may have, but I made the statement." Which means that this next Congress will be her last as speaker. And that there will be a massive leadership vacuum for Democrats sometime very soon. (Caveat: Pelosi did not come right out and say, "I will not run for speaker again in late 2022," which leaves her some level of wiggle room, presumably.) THE POINT -- NOW ON YOUTUBE! In each episode of his weekly YouTube show, Chris Cillizza will delve a little deeper into the surreal world of politics. Click to subscribe! Her top deputies -- Majority Leader Steny Hoyer (Maryland) and Majority Whip Jim Clyburn (South Carolina) -- are 78 and 77 years old, respectively. While it's not clear whether they will step aside from leadership when Pelosi does or not, it's very likely that the broader caucus will look to younger leaders. The most obvious name on that list is New York's Rep. Hakeem Jeffries, who is currently the fifth ranking member of leadership, having been reelected Wednesday to his role as Democratic caucus chairman. At 50, Jeffries represents a next-generation leader who is trusted by Pelosi; she named him as one of a handful of House impeachment managers to make the case for President Donald Trump's impeachment to the Senate last January. Rep. Katherine Clark of Massachusetts, who won the race for the number four leadership slot (assistant speaker) on Wednesday, would also have to be in the mix as a Pelosi replacement. As would California's Rep. Tony Cardenas, who is vying to head the party's campaign arm in the 2022 election. While those ambitious Democrats now have an end date for the era of Pelosi, it's far less clear whether they will be vying to be speaker of the House or House minority leader come January 2023, after Republicans had a far-better-than-expected election in 2020 -- and history suggests that the president's party fares poorly in his first midterm election.