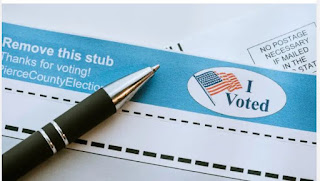 Joe Biden received a fraudulent 'dump' of 143K ballots in Wisconsin in the early morning hours after Election Day 2020.

In the continuous stream of tweets alleging election fraud issued from the Twitter account of President Donald Trump in mid-November 2020, one tweet posted in the evening of Nov. 18 claimed that victorious Democratic presidential candidate had received an “unbelievable” “dump of 143,379 votes at 3:42AM, when they learned he was losing badly”:

It is true that Biden picked up about 149,000 votes in Wisconsin around 3:30 AM in the early morning hours following the election, thereby erasing a lead Trump had held in the in-progress vote tally up to that point:

However, no fraudulent activity of furtive “dump” of ballots was behind this phenomenon. Biden’s vote count took a big jump around the time in question because that was when Milwaukee reported the tabulation of its approximately 170,000 absentee (i.e., mail-in) ballots, and that occurrence was doubly favorable for Biden — both because Democrats were far more likely to vote via absentee ballots, and because Milwaukee County (which includes the city of the same name) is the most populous county in Wisconsin and went Democratic by a huge margin:

The Milwaukee Journal Sentinel reported on the bulge in Biden votes, and the reasons behind it, at the time it took place:

Biden overtook Trump in the early morning hours when Milwaukee reported its roughly 170,000 absentee votes, which were overwhelmingly Democratic. Then early morning returns from Green Bay and Kenosha on Wednesday added to his slender lead.

Trump had nurtured a lead of more than 100,000 votes before those returns came in.

By the morning after the election, even Trump had recognized (if not accepted) the phenomenon of mail-in ballots in most states being heavily Democratic, in large part because he discouraged his supporters from using that method of voting:

In fact, more than two months before the election, NPR had observed that “President Trump’s campaign to discourage the use of mail-in voting this fall is raising concerns among Republicans, particularly in the key swing state of Wisconsin, that his efforts could hinder their party on election night.”

As of this writing, Biden has won Wisconsin (and its 10 electoral votes) by just over 20,000 votes out of more than 3.2M ballots cast: