Trudeau urges Canadians to reduce contacts as COVID-19 cases rise Canada’s top public health officer says daily COVID-19 cases could reach 60,000 by end of 2020 in worst-case scenario. Canada is reporting an increase in cases of COVID-19 and hospitalisations, pushing officials to urge people to be vigilant and follow public health guidelines [Blair Gable/Reuters] Canada is reporting an increase in cases of COVID-19 and hospitalisations, pushing officials to urge people to be vigilant and follow public health guidelines [Blair Gable/Reuters] 20 Nov 2020 New COVID-19 infections in Canada could soar up to 60,000 per day by the end of the year in the worst-case scenario, the country’s top public health officer has warned. Speaking to reporters during a Friday morning briefing, Dr Theresa Tam said even if Canadians follow current public health restrictions, new COVID-19 cases could jump to more than 20,000 per day by the end of December. KEEP READING Hong Kong to close more schools after spike in coronavirus cases India’s coronavirus cases surpass 9 million Coronavirus cases in Africa cross two million mark: AU tally That is up from less than 5,000 new daily infections now, a likely surge that Tam said could overwhelm the healthcare system. “The healthcare systems in certain jurisdictions, certain cities, are already feeling the pressure,” Tam said. “So if that’s happening now, you can imagine that these exhausted healthcare workers are not going to be able to cope [with a surge].” Several provinces across Canada have reimposed restrictions on movement and businesses as the country witnesses the second wave of the pandemic. Canadian provinces have tightened restrictions in recent weeks amid a surge in COVID-19 cases [File: Carlos Osorio/Reuters] Officials have urged people to remain vigilant while acknowledging that many are fatigued by the ongoing public health measures. “This wave is undeniably harder. We are all tired, we are all lonely, and we all want our lives back, but we can’t give up now,” Health Minister Patty Hajdu said during the news conference. ‘Tighten things up’ Prime Minister Justin Trudeau also spoke to Canadians from his personal residence on Friday, reiterating the need to limit personal contacts to stem the spread of the virus. “We have to follow public health guidelines. We need to reduce our contacts, to make wise choices,” Trudeau said in French. “We’ve reached the point where we have to tighten things up for a few weeks to block, to stop this COVID-19 outbreak.” Trudeau said huge spikes of infections have been witnessed in the provinces of Ontario, Manitoba, Saskatchewan, Alberta and in the northern territory of Nunavut, which imposed a two-week lockdown after a surge in cases. Play Video The territory currently has 84 confirmed cases of COVID-19. “As we head into the weekend, it is imperative that Nunavummiut limit visiting, maintain strong physical distance and wear masks when outside their households,” Dr Michael Patterson, Nunavut’s chief public health officer, said in a statement on Friday. Meanwhile, Canada’s most populous province, Ontario, recorded 1,418 new COVID-19 cases on Friday. In a news conference later on Friday, Ontario Premier Doug Ford announced that Toronto and the nearby Peel region would be moving into lockdown starting at 12:01am local time on Monday to try to stem the spread of the virus, local news outlets reported. In neighbouring Quebec, which has the highest number of COVID-19 cases and related deaths, 1,259 new cases were reported on Friday. An additional 32 deaths were also recorded in the province, for a total of 6,774 since the pandemic began. Healthcare system strain Trudeau said Canadian hospitals are overwhelmed and every new case of the virus puts added pressure on the system. “They’ve been on the front line for almost 10 months now,” he said, about front-line doctors, nurses and other health workers. “They have been heroes, they have been going above and beyond anything they might have thought they were signing up for. We need to help them. We need to give them a break. We need to stop this spike in cases.” Officials predict that by November 30, the total death toll could be between 11,870 and 12,120 in Canada, with the total cases between 366,500 and 378,600. The country has recorded a total of 315,751 cases and 11,265 deaths so far. 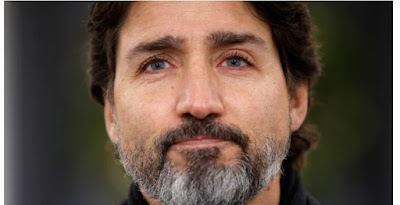