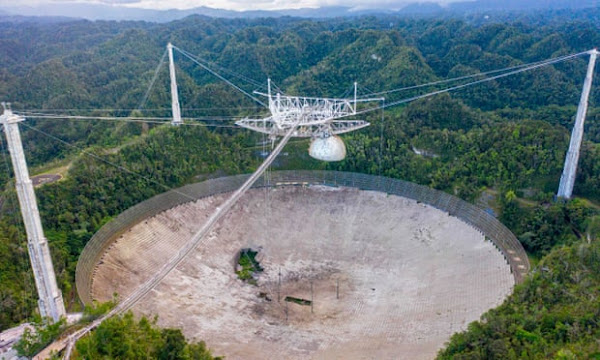 The observatory has played a key part in space exploration – and a few movies – but two accidents have rendered the 305m-wide instrument unsafe Reuters Fri 20 Nov 2020 01.16 GMTLast modified on Fri 20 Nov 2020 11.41 GMT Shares 324 The Arecibo Observatory in Puerto Rico is being closed down because engineers say it is unsafe. The Arecibo observatory in Puerto Rico is being closed down because engineers say it is unsafe. Photograph: Ricardo Arduengo/AFP/Getty Images A huge US space telescope nestled deep in the Puerto Rican jungle will be shut down after suffering two destructive mishaps in recent months, ending 57 years of astronomical discoveries. Operations at the Arecibo observatory, one of the largest in the world, were halted in August when one of its supportive cables slipped loose from its socket, falling and gashing a 30-metre (100ft) hole in its 305m-wide (1,000ft) reflector dish. The search for life – from Venus to the outer solar system Read more Another cable then broke earlier this month, tearing a new hole in the dish and damaging nearby cables as engineers scrambled to devise a plan to preserve the crippled structure. The accidents at the site – also famed as the setting for James Bond movie GoldenEye, as well as Contact starring Jodie Foster – prompted the US National Science Foundation (NSF), an independent government agency, to call time on the facility. A photograph showing the damage done to the dish by a broken cable in August. FacebookTwitterPinterest A photograph showing the damage done to the dish by a broken cable in August. Photograph: AP “NSF has concluded that this recent damage to the 305m telescope cannot be addressed without risking the lives and safety of work crews and staff,” Sean Jones, assistant director of the mathematical and physical sciences directorate at NSF, said on Thursday. “NSF has decided to begin the process of planning for a controlled decommissioning,” Jones said. Engineers have not yet determined the cause of the initial cable failure, an NSF spokesperson said. 2:22 Nasa launches Perseverance rover in mission to find evidence of life on Mars – video The observatory’s vast reflector dish and a 816-tonne structure hanging 137m above it, situated in the humid forests of Arecibo, Puerto Rico, had been used by scientists and astronomers around the world for decades to analyse distant planets, find potentially hazardous asteroids and hunt for signatures of extraterrestrial life. The telescope was instrumental in detecting the near-Earth asteroid Bennu in 1999, which laid the groundwork for Nasa to send a robotic probe there to collect and eventually return its first asteroid dirt sample some two decades later. The Arecibo Observatory space telescope. FacebookTwitterPinterest The Arecibo observatory space telescope. Photograph: UCF/Reuters An engineering firm hired by the University of Central Florida, which manages the observatory for NSF under a five-year $20m agreement, concluded in a report to the university last week “that if an additional main cable fails, a catastrophic collapse of the entire structure will soon follow”. Citing safety concerns, the firm ruled out efforts to repair the observatory and recommended a controlled demolition. News is under threat … … just when we need it the most. Millions of readers around the world are flocking to the Guardian in search of honest, authoritative, fact-based reporting that can help them understand the biggest challenge we have faced in our lifetime. But at this crucial moment, news organisations are facing a cruel financial double blow: with fewer people able to leave their homes, and fewer news vendors in operation, we’re seeing a reduction in newspaper sales across the UK. Advertising revenue continues to fall steeply meanwhile as businesses feel the pinch. We need you to help fill the gap. We believe every one of us deserves equal access to vital public service journalism. So, unlike many others, we made a different choice: to keep Guardian journalism open for all, regardless of where they live or what they can afford to pay. This would not be possible without financial contributions from those who can afford to pay, who now support our work from 180 countries around the world. Reader financial support has meant we can keep investigating, disentangling and interrogating. It has protected our independence, which has never been so critical. We are so grateful. We need your support so we can keep delivering quality journalism that’s open and independent. And that is here for the long term. Every reader contribution, however big or small, is so valuable. Support The Guardian from as little as $1 – and it only takes a minute. Thank you. Support The Guardian